What can we learn about party comms from the Conservative and Labour’s Twitter channels? by Luke Webb

Twitter has become one of the most important political battlegrounds of modern times; as campaigning has moved beyond just traditional methods such as leafletting, a greater emphasis has been placed on social media as a place where messages are developed, and opposition claims attacked. Twitter channels run by political parties offer an insight into how they view both themselves and each other. Given the frequency of tweets posted, Twitter has a particular value when analysing how key messages are shaped over time, and therefore gives us a periscope into how party campaigns develop.

Analysing tweets posted by the Twitter channels of Labour (@UKLabour) and the Conservatives (@Conservatives) Saturday 30th November and Sunday 1st December, while not an exact science, we begin to get an understanding of how the two main parties have built up their messages and, on a broader level, run their campaigns. The findings from these are referenced throughout the article and can be found in the table below.

The most salient point of difference between Labour and the Conservatives is how, and to what extent, they seek to attack each other. It is here that we find the biggest difference: The Conservative Party spend far more time attacking opposition parties than Labour do (41.1% of all tweets, versus Labour’s 28.8% – see table below). 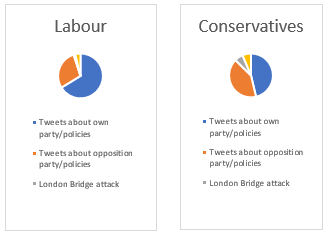 Moreover, the data suggests that Conservatives are more reluctant than Labour to talk about themselves. Of all of the tweets from the Conservatives in our controlled test period, only 46.3% were about their own policies, compared to Labour’s 66.3%. Though there are numerous reasons for this, one might speculate that, as both the incumbent party for over 10 years and the leader in the polls, the Conservatives are happier not to make grand statements about change.

Likewise, it is arguable that the Conservatives have put a greater value on what we might think of as old-fashioned spin. A large point of difference between the two parties is the amount of times they retweet their press offices, with the Conservatives retweeting their press team (the now infamous @CCHQpress) 14.7% of the time to Labour’s 2.5%. This was particularly high during the Sunday debate.

Labour, on the other hand, are most comfortable talking about their policies for change. As has been widely noted, Labour have sought to move this election away from the Brexit debate, with some success. Labour have tweeted far more about the NHS than the Conservatives (10% to 3.6%). This has seen a slight shift in polling: since the 15th October, Brexit has lost four percentage points on its lead as the most important issue, and health has gained six percentage points[i]. Though this is hardly a seismic change, it represents the gains that can begin to shift an election.

This is not to say that Labour do not spend time attacking the opposition. The most common attack line they used last weekend was equating Boris Johnson to Donald Trump particularly around the NHS. In much the same way that the Conservatives have used Jeremy Corbyn as a figure to attack Labour, it appears that Labour believe Trump represents something of a political liability for the Conservatives.

Responding to the London Bridge attack

Twitter can also be helpful in measuring responses to live-time events. The tragic events on London Bridge on Friday 29th November have arguably changed the narrative of the election. Much has been made of the Conservatives’ response to this, with Boris Johnson being criticised for using it for what has been perceived as political gain. This has been reflected on Twitter.

Following the attack, the Conservatives tweeted far more than Labour (six times to Labour’s one). This was reflected in an increase in content around security, as well as criticism of Corbyn directly.

Tracking immediate responses gives us a picture of how the parties deal with unfolding events. For political parties, this is where the value of Twitter lies: in developing narratives in real-time, responding to things that are happening in the world and building messages around them. What this small data study begins to show is how the two parties have diverged in their approaches, particularly when it comes to how they have attacked each other and the messages they’ve chosen to promote. The data recorded here is reflected in the wider campaigns and gives a clear indication of how the two parties have chosen to set up their campaigns in differing ways.

Luke Webb is an account executive at The PR Office.